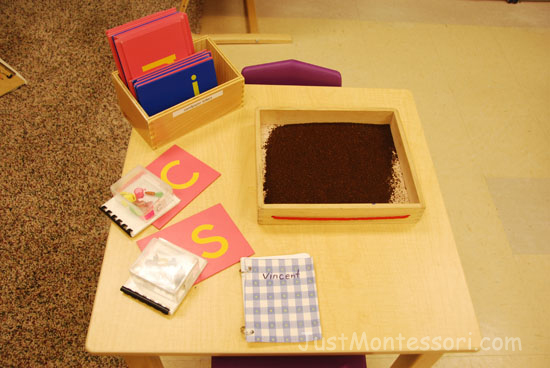 The Sandpaper Letters are one of the main features of the language area in a Montessori classroom. They are beautiful and easily attract the attention of children. As children work with the Sandpaper Letters, their sense of site, touch, and hearing is involved. They can feel the sandpaper shape of each letter and begin to learn that each one has a name and a sound. Phonetic sounds are the foundation for the reading program in a Montessori classroom.

A special sound table area can be set up in the language area or a sound shelf. Materials needed for this would be a set of Sandpaper Letters, object boxes, picture books, a coffee tray, sound book, and letter sound necklaces. A record booklet of your choice will be helpful in keeping track of the child’s progress in learning letter sounds. Another option is to have a sound booklet for each individual child that you can use to keep track of progress in, and children can take home once they’ve learned their sounds.

Introduce two letters at a time. You begin with the sound booklet, turning each page as the child tells you the sound that letter makes. The first two that a child does recognize, are the two that you will present during the lesson. Starting with the SPL, one at a time, the letter is named and the sound it makes follows. Example: “this is the letter b, it says ‘b’.” Children trace the letter with both hands and repeats the sound. Then you take out the little box of objects and look at objects that begin with the sound____. Emphasizing the letter sound with each object. Repeat with the picture booklet. Next place coffee tray on the table and make the letter sound into the coffee. Have the child trace the letter you traced. Shake the tray and now the child can make the letter sound into the coffee tray. Introduce the second letter and repeat all followed by a three-period lesson with those two sounds.

You can give the child a page to color and/or the letters to trace following the lesson. I make little necklaces for the child to wear home. They choose one from the two letters they learned that day. Instructions are on the back of the necklace for parents. The child will find three objects or pictures at home that begin with the sound on the necklace and bring them to school to show what they have found and return the necklace.

This is one idea of how to introduce Sandpaper Letters Sounds to the children. This is how I was taught during my Montessori Teacher training course, and I find it to be a very successful and fun way for a child to begin their journey towards reading!

Theme: Guten by Kaira
error: The content is copyrighted and protected!